September 10, 2015 in Community, Info for residents

Although the downtown area of West Chester, PA, is small enough for you to easily walk from one place to another, the larger area offers a number of great places to visit, including the city of Philadelphia. In West Chester, you could drive your way around town, catch a bus at many locations or take a commuter train east into Philadelphia if you so wish. Continue reading to find out more.

Operated by the Southeast Pennsylvania Transportation Authority (SEPTA), there are a handful of busses that make their way through West Chester. They go to various points of interest like West Chester University, the Paoli Train Station, Exton Square Market and Immaculata University among others. The central hub for all of the bus activity in West Chester is the West Chester Transportation Center, which can be found on Market Street near the Chester County Justice Center and is less than half a mile’s walk from 124 Marketplace.

If you have your own vehicle, making your way through West Chester is a pretty easy task. The town rarely has any kind of heavy traffic – even during rush hours – and there’s usually only a real slowdown if major construction is going that requires a detour. Even then, the delays are negligible.

When it comes to actually driving through West Chester and finding wherever it is you might be trying to make your way to, the town’s grid setup makes for easy navigation – especially if you have a GPS or smartphone.

The parking situation in West Chester is pretty straightforward as well, though you will likely end up having to pay if you’re planning on going downtown. Hourly and daily lots are plentiful in that area though, and costs are reasonable (especially when compared to larger metropolitan areas).

One of the great things about living in West Chester is being close enough to a major city like Philadelphia, but still enjoying the charm of living in a smaller community. For the days you want to visit Philly for some big-city shopping or to try some of the city’s haute cuisine, there are three distinct ways to get there from West Chester, and they include driving, bus and commuter train.

The best route to take while driving will have you enter US-202 N on E Market Street and then from there, taking I-76 E. This will take you right into the heart of Philadelphia. Just take your exit as required.

If you would like to take a bus from West Chester to Philadelphia, you can catch the 104 at the West Chester Transportation Center and switch at West Chester Park & Eagle Road to the 123. The 123 will take you the 30th Street Station, from which you can make your way to wherever you need to go in the city.

The commuter train that’ll get you to Philly can be caught near the northern end of town and there are a number of stops available for your convenience. The SEPTA R5 stops in West Chester in the neighborhoods of Exton, Whitford and Malvern, and are fairly easy to locate from there.

Although there are plenty of easy ways to get around (or out of) West Chester, you have to be living in the center of it all to do so. Right now, 124 Marketplace still has units available. Apply now, schedule an appointment to see the building, or give our leasing office a call at (610) 696-5687, and you can start reaping the benefits of West Chester living.

?> 5 Places You Could Walk to For Dinner If You Lived at 124 Marketplace 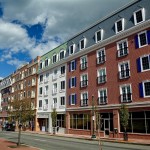 Don’t Miss Out On This Awesome September Leasing Special!