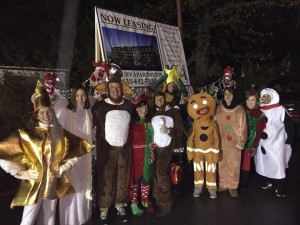 Friday December 5th, 2014 West Chester staged their annual “Old Fashion Christmas Parade” in the borough, and despite some bad weather the event was a smashing success. We decided it was a great idea to spread the holiday sprit, while showcasing the beautiful building that is being built on Market Street. As seen above, our team dressed up in typical holiday themed costumes to go along with our float that included a smoky chimney that reminds many of the holidays. Everyone in the company had a great time gathering together, before and after to spread the word about 124 Marketplace, as well as enjoy the parade from a different perspective than usual. We handed out footballs, and walked through the streets of West Chester. Hope everyone enjoyed the Christmas parade as much as we did. Next year YOU could have a front row seat from your brand new unit at 124 Marketplace. With luxurious living, and a phenomenal location, this could be your lifestyle at 124 Marketplace.

Give the best gift for the holidays: 124 Marketplace Cash!